How we got started… 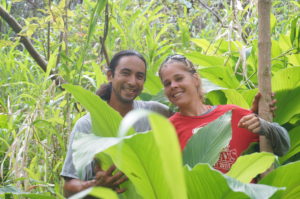 The agriculture system is complicated. There is no doubt about that. We want to make it simplier for the islands that we call home. Founded by Jesse Fujimoto and Laura Rieber who found themselves in a confusing state when they decided to become farmers and grow food for the community.

Jesse is born on Oahu and moved to the Big Island over a decade ago to make a difference in his home state. He felt a calling to get back to his roots and coincidentally, the land. His great-grandfather immigrated to the southern part of the Big Island to farm and grow food. Three generations later, he found himself doing the same thing.

Laura moved to the islands in 2003 to live out a dream of graduating from a university. After moving here and meeting Jesse, she has a hard time leaving the islands intense beauty and life. She graduated from the University of Hawaii, Hilo with a degree in  agriculture while focusing on sustainability. During her time at the universtiy she took several classes and joined a few clubs that focused on small growers taking crops that they produced and enhancing them, or adding value to them to be able to obtain a higher price. 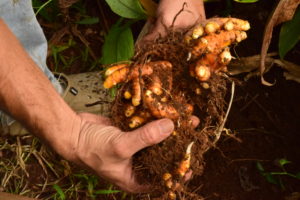 As they began growing food they realized that there was a choice to be made. They had to choose between conventional (industrial) agriculture and natural (organic) agriculture. Conventional agriculture is the most common type and most utilized practice that we see today. This is the mass production of a single or a few crops with the aid of agriculture products including salt based synthetic fertilizers, chemcial pesticides and heavy machinery. These growers ultimately sell what was mass produced for “cheap”. High quantity, low quality. The more this common method is looked into the more that it is realized that this style of farming is easily mechanized there is an increase in pollution entering Hawaii’s streams, rivers and oceans with the increasing amount of erosion and leaching that is occurring. These industrialized growers, although making a profit rarely consumed what they grew. 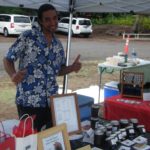 Weighing the cons with the pros they searched for an alternative and found one; natural agriculture (also known as organic). They could also choose to stay small, grow without the synthetics, produce high quality foods and educate others. High quality, low quantity. By staying small, they could diversify and offset the cost of living by being able to achieve their own personal goal of successfully growing their own food. Food they are willing to eat, share with others and enjoy. Let’s face it, with Hawaii’s already high cost of food, eating organically is out of the questions for the average income family, like the majority of farmer including themselves.

So they set forth to utilize the knowledge about value adding they received to be a successful small grower in Hawaii. Starting with naming their homestead; No Spray Hawaii and offering CSA drop offs. They went to local farmers markets. The fact of the matter was, they were struggling and not financially successful in any means. On their journey they found every “catch 22” that made apparent that being a successful small grower was difficult. 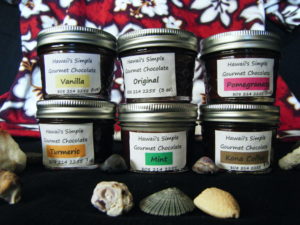 The two decided to combine their own skills and passions together to start a business geared at helping growers, like themselves, have an easier time getting started. This is how Hawaii’s Simple Gourmet came to be. Sitting at the farmers market trying to sell turmeric, turmeric plants and classes about how to grow turmeric naturally while answering questions about the comparison of large and small scale production of a plant intended to be used as medicine. Doing all of this, they made less than a dollar in sales.

People didn’t want information. The average person doesn’t want plants. Broke in finances but rich in a passion and desire, they continued to push forward to figure out how to be successful as a small natural grower. This is how Hawaii’s Simple Gourmet Chocolate got started. Already a chocolate fan, they had a friend who shared with them a healthy chocolate recipe. They spent weeks enhancing it and adding flavor to it.

Using high quality ingredients and processing them in a way that benefited the customer. Skimping on nothing, they went back to the farmers market. Now with a product. They continued to educate the people who came to them about the difference about a product rather than a crop and actually walked away with people saying thank you and supporting. The more they educated, the more people wanted to purchase this amazing chocolate. They kept going back to the market, enhancing their product and creating a line. Along the way, as support continued with the chocolate they improved the packaging and began to obtain proper signage. The farmers market was the perfect way to meet conscious consumers who were looking for quality products.

It was realized that they couldn’t do it all themselves, nor grow more while selling more all the while maintaining their strict growing standards. With this insight they started partnering with other similar minded growers. Partnering and promoting each other rather than competing. It didn’t matter if we sold what we grew or what others grew. It was the fact that a small farmer of Hawaii was being supported and paid fairly for growing in a manner that benefited the future rather than themselves.

Within six years of setting their own personal goal of growing their own food, they grow over 80% of their produce and 80% of their own meat. They now make a steady income with HSG. The first successful grower. They could do this because the high quality, local products being created were desired by the conscious consumer who didn’t know how to find the natural grower.

This goal did not come easily. In fact, it was hard work. There were many set backs and realizations along the way. They realized why there are not too many successful natural growers. They found out that growing in this fashion is not the forefront of the futures generations career goal. It is nearly impossible. The choice to work towards this goal rather than starting a family of their own was a guiding factor. Together, Laura and Jesse want to help the small, natural growers of the future be successful with being able to have a family of their own. They want to take the ridiculous work out of it by partnering and promoting.

By bridging Hawaii’s Natural growers with eh conscious consumer with high quality, local, simple gourmet products, these farmers can become successful members of our community and a career choice for the future. These farmers can supply nutritious food for our community and high quality products for our visiting tourist. This can be the future. It is in the hands of the shoppers. Choose HSG.

Click the link below to read entire article written by West Hawaii Today.

A bridge between consumers and Hawaii natural growers: Hawaii’s Simple Gourmet spreads a message of sustainability and healthy living